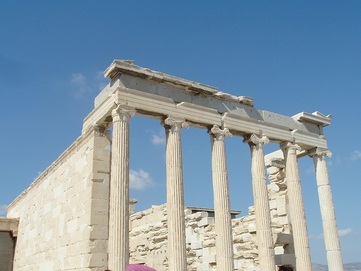 Sophia is the Greek name for wisdom. I was privileged to be able to visit Greece four years ago, before the global meltdown and the rioting in the streets. What a beautiful country, surrounced by turquouis seas. But peace is no longer found there...

In  public school, I had learned much about the Greek and Roman societies, the gods they worshipped, the governments they formed.  Democracy was born in Greece and republics were formed in Rome. And yet, on our trip, we climbled the hill where the Greeks travelled to worship the oracle at Delphi. It was idol worship that they sought, they didn't find the true God there. The Greeks, who prided themselves on their search for wisdom, did not find it through their worship of Zeus and his progeny. They did not find Sophia among them...

The Apostle Paul came to Corinth several times, maybe even up to four visits. We have two that are recorded in the books called I and II Corinthians in the Bible. He also visited the beautiful city of Athens. I was able to stand on the place that is called "Mars
Hill" where Paul stood at the Tomb of the Unknown God and proclaimed in Acts 17;22-:

"Then Paul stood in the midst of of the Aeropagus and said, 'Men of Athens, I perceive that in all things you are very religious for as was passing through and considering the objects of your worship, I even found an altar with this inscription:
TO THE UNKNOWN GOD,
Therefore, the One whom you worship without knowing, Him I proclaim to you; GOD, who made the world and everything in it, since He is Lord of heaven and earth, does not dwell in temples made with hands. Nor is He worshipped with men's hands, as though he needed anything, since He gives to all life, breath, and all things,
And He has made from one blood every nation of men to dwell on the face of the earth, and has determined their preappointed times and the boundaries of their dwellings,
so that they should seek the Lord, in the hope that they might grope for Him and find Him, THOUGH HE IS NOT FAR FROM EACH ONE OF US;
for in Him we live and  move and have our being, as also some of your own poets have said,  'For we are also His offspring.'

So you see, Sophia is not human wisdom or reasoning, it is knowing God, through the person of His Son, Jesus Christ. The wisest man in the world was Solomon, the son of David, the King. If you want to get acquainted with Sophia, read about her in Proverbs. She is crying out in the streets right now for anyone who will listen.  Few will. Will you be one of them?
Google Analytics